Around the World in Seventy-Two Days 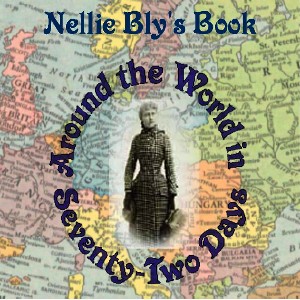 Around the World in Seventy-Two Days

Librivox recording of Around the World in Seventy-Two Days by Nellie Bly.
Read by Mary Reagan.

This is a true account by an American woman journalist who, in 1889, set out to see whether she could beat the fictional journey in Jules Verne’s 1873 novel, Around the World in Eighty Days. Wearing one dress and carrying one handbag, Elizabeth Cochrane Seaman (pen name “Nellie Bly”), reported her travels back to avid readers in America.(Summary by Mary Reagan)

Miss Bly had many other amazing adventures in her life, including feigning insanity in order to be sent to an asylum and then write about her experiences in the newspaper and in her book *Ten Days In A Mad-House*.

Reviewer: Timothy Ferguson - favoritefavoritefavoritefavoritefavorite - May 5, 2013
Subject: Brilliantly read
Nellie Bly manages to circumnavigate the globe in her targeted time with only a little piece of hand luggage, a custom-made dress, and the endless financial support of the World newspaper. They do cheat a little by putting on a special express train to get her across the United States. I thought this book was charming, and aside from the dull clang when Bly uses terms now considered racist, I found her quite open-minded for a Western traveller. She is thrilled by things like curry and catamarans, and can usually be depended on not to downplay things she sees because they are foreign.

At the same time, some of the things she cites as alien are just bizarre. For example she describes an Egyptian child held to its mother’s side, holding on like a monkey on a tree. Now, potential racism aside, surely that’s a hip carry? How can she not ever have seen a woman (or man) perform a hip carry before? That’s the bit that’s interesting with Bly herself: some of the things she claims to have never seen before are just so ubiquitous that it’s unbelievable that she could state she has not seen them in her normal life.

There’s also the ambiguity of her “confirmed spinster” status. She takes a great deal of time to discuss the beauty of the women around her. She notes her temptation to return Mrs Verne’s French greeting, of pecks on her cheeks, with a proper American smooch. Is she subtly signalling an inclination, or is this again part of the alieness of historical people?

I thought the Librivox version of this was fantastic and congratulate the reader. It’s based on a free e-text at Open Library.

The books text is "journalistic" in that it is of an episodic newpaper like presentation. The writer showed enthusiasm and delight at all of the environments she found herself in and the reader has brought this to life. In fact even if you dont like the story I think you'll be enthused by the reading.

For more Free Audio Reviews visit http://freeaudioreview.blogspot.com/
Reviewer: Bee46 - favoritefavoritefavoritefavorite - February 4, 2008
Subject: Interesting, Enteraining and Well-Read
Thanks to Mary Reagan for taking the time to read to us the compelling story of Nellie Bly's adventure in her attempt to circumnavigate the world to beat Phileas Fogg's fictitious attempt to do the same in 80 days.
Mary did a great job in holding the reader's interest as she strived in her endeavor to have the listener believe that it was Nellie Bly herself regaling her journey.
It is a story well worth a listen.

Uploaded by librivoxbooks on February 24, 2007